You will receive your rental car at the Sixt branch, which is located in the "Mietwagenzentrum" inside the train station, which is at the main entrance of the station opposite to Starbucks.

All S-Trains (S1-S9) will stop at Frankfurt Hauptbahnhof as well as U-Trains U4 and U5.

To return your Sixt vehicle please drive into the garage "Am Hauptbahnhof", in the Stuttgarter Straße 35, 60329 Frankfurt am Main.

Please park the Sixt vehicle in the garage "Am Hauptbahnhof", entrance via Stuttgarter Straße, Sixt is on Level 7.

Key return is inside the Central Station (not in the garage), the key box is located in front of the car rental area (Mietwagenzentrum) on the left side in front of the Hertz counter.

Make the most of your time in Frankfurt with car hire from Frankfurt Main Central Station. At Sixt, we are proud to offer a fleet of premium rentals which include vehicles from high end manufacturers such as Mercedes-Benz, Audi and BMW. You can choose a ride to match your needs, and with a range of categories from which to make your choice, there is sure to be an affordable car hire that is ideal for you. We offer comfy saloons for solo travel, or spacious estates for families. If you love speed, then select a sports car or convertible, and there are 4x4s for anyone planning to cross tougher terrain. It is quick and easy to collect your car hire at Frankfurt Main Central Station as we are conveniently located at the main station entrance. 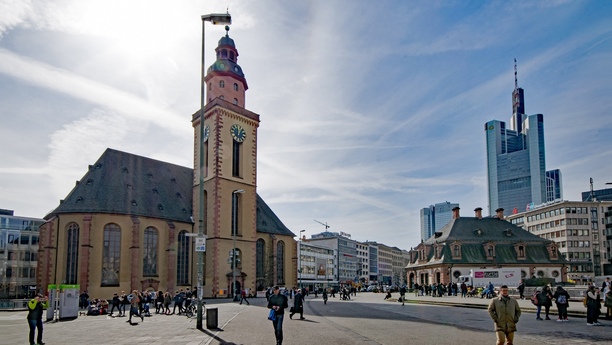 You can book your Sixt car rental at Frankfurt Main Central Station online, or by phone and personalise your rental package with a host of additional extras. There are car seats to keep little ones safe and Sat Navs to help you find your way around the city and beyond. You can upgrade your insurance cover by choosing unlimited mileage or an additional driver, which is ideal if you are planning to travel long distances. There are special deals for under 25s, or you can choose a loss damage waiver. Please be aware that we cannot guarantee a particular model as your booking is for a vehicle category. We hope you enjoy exploring this sophisticated city with your car rental from Sixt.

Great staff. Parking around the corner in the parking garage at the bus station. Easy returns.

Don't forget to leave your parking ticket in the car and hand it in with the key. ;)

(Translated by Google) I describe my experience with this rental (my first rental experience ever).

I decide to rent a car in Frankfurt and go all the way down to Munich to see the German castles. My journey includes more than 1000km and the return of the car to Munich.

I booked through the Autoeurope website which seemed to me the clearest on the rental conditions and the minimum requirements, after evaluating various offers based on the cost of the cars and the mileage I intended to travel (1200km in less than 4 days), I opted for a slightly more robust car and I chose an Opel Insigna (or as indicated, an equivalent car). I decide to go and collect the car one hour earlier than established as before the delivery of the car the operator briefly summarizes the type of contract and offers you additional insurance that you can include or not at your choice (glass insurance, etc ...). During the booking phase with Autoeurope I had already included the deductible that I recommend to everyone for peace of mind, the glass insurance and the full coverage of the vehicle, but I refused it. The operator also informs me that the car assigned to me is an Audi A3 SLine (moreover much superior to the Opel Insigna that I had chosen during the booking phase, both as a car and as accessories) and I accept. However, the contract is stipulated in less than 10 minutes and during which it is necessary to use only the credit card in the driver's name in order to block the deposit. I am provided with a copy of the contract printed on the receipt and a sheet that tells me where the Sixt garage is to collect the car (A garage 5 minutes walk from the central station in frankfurt, among other things a bit difficult to locate since the Sixt logo is not clearly visible). Upon arrival at the garage there is another operator who hands me the keys and shows me the car. Before driving it, I check it well to see if there are bumps / dents / scratches or any type of defect to avoid unpleasant surprises. Finding nothing, I decide to leave. During the whole trip the car did not show any signs of problems and I did not find any kind of difficulty in driving even at high speeds (in Germany there are many motorways without speed limits so it is also possible to push the accelerator, and with such a car travels very quietly). A stamp on the dashboard also indicates the maximum achievable speed of the mounted tires which in my case was 210 km / h. When returning the car it is better to anticipate a little earlier since you must first stop at a sixt point to find out where the garage is located and then you have to fill up the car before reaching the garage and returning the car. Upon delivery, an operator checked the entire machine (inside and out) to look for any damage / scratches / problems with the upholstery or warning lights on the panel, for about 5 minutes. After that, having found that there was no damage, he made me put a signature on a tablet, personally confirming that he had not found anything suspicious. After a while I get an email with a document certifying that there is no damage detected but also with a sentence that says that the final confirmation will take place after washing the car which could point out damage not visible before. This makes your nose turn up a bit but after 2 days I received a message from the bank confirming the cancellation of the deposit without any other emails from Sixt (from which I deduce that they did not find any problems even after washing). What can I say, a confirmation email would have been appreciated. However, the rental went well and I plan to choose it again in the future on future trips.