We look forward to welcoming you to our SIXT branch inside the Sants train station. We are located in the main central corridor of the station next to the entrance. If you come from the Plaza dels Paisos Catalans it would be straight through the corridor that is accessed from the door on the left. If, on the other hand, you enter from the back, through Plaça de Joan Peiró, it will be just entering through the central door

Barcelona Sants is the right train station for you, if you want to travel with the fast train (AVE) to Madrid, Sevilla and Malaga. The trip to Madrid only takes 2 hours 40 minutes, if you take the fast train without any other stops. With this offer the spanish railroad (RENFE) gives a comfortable alternative to the plane in order to travel between Barcelona and Madrid. If you compare the amount of time for checkin and trip to the airport there can be even a time advantage. In Barcelona Sants SIXT offers the same connection mobility as at Barcelona Airport.

To return your car at our Sants Station you can access from Avenida de Roma, place yourself in the middle lane and access by going up the ramp to the parking of the station. When you reach the top floor, turn left at the roundabout and you will find the parking places of SIXT.

Please drop the keys into the key box, next to the Sixt branch in the parking. From here you can access to the Sants station through the stairs.

Other SIXT branches in the vicinity of Barcelona Sants Train Station MANUAL
Audi A4
Or Similar | Saloon * The prices were calculated on 05.07.2022 for a 7 days prepaid rental at Barcelona Sants Train Station starting on 05.08.2022. Our prices fluctuate daily and this offer is not guaranteed.

WHAT MAKES SIXT AT BARCELONA SANTS TRAIN STATION SO SPECIAL?

With affordable deals, no hidden costs or credit card fees

A wide choice of vehicles including exotic models

Sixt rent a car Barcelona Sants is a new office directly opposite the Station of Sants. Our car hire Barcelona Sants office is situated in the building of the supermarket "Hipermercat Esclat". The parking area can be found on the third floor of the building. There you can hand over the car key to our staff at the Sixt rent a car counter. Outside of our opening hours you can leave the key and the ticket you received when you entered the parking, in the safety box. Sants is located circa 10 minutes by metro from the city centre and it is like a world apart. 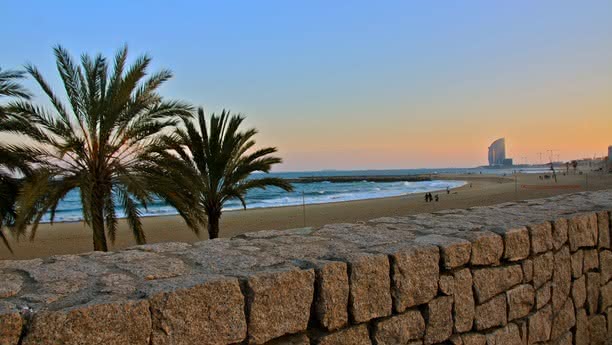 The central station of Sants is one of the best in Barcelona, with direct connections to the airport and connecting cities. Nearby, there are further underground stations, like Plaça de Sants and Tarragona, which belong to the green line. Nearby, you also have the posibility to go shopping. The "L'Illa", which is located on Diagonal in the north of Sants, or "Las Arenas" next to Plaza Espana. Having your girlfriend with you, you will be happy to have the chance to store all her shopping bags inside your car rental. Sants even has an own district festival in August! During this month the streets are decorated and people dance all night. Barcelona, the capital of Catalonia, is the second biggest city of Spain. As a town with a great traditional background, culture and history, it is attracting thousands of tourists every year. Although many people say, that it was Hercules who built the city 400 years before the foundation of Rome, it were the Romans themselves who built this town in the year 15 BC. A big trading city was created from a small settlement.