Our SIXT branch is located in the car rental area of Lisbon's main International Airport. After leaving the Arrival area terminal, kindly please go to the turn right and follow the indications to the Rent-a-Car area. You will find our SIXT counter located on your the left hand side of the hall. Our team is ready to welcome you!

On the motorway, please take exit 2 toward Pq.das Nações/Olivais Sul/Aeroporto. Opt for the direction for the Alameda das Comunidades Portuguesas and use the right lane to merge onto Avenida Berlim. At the roundabout, take the 3rd exit onto Alameda das Comunidades Portuguesas, follow the road into a slight right turn, then turn right and you will find the Lisbon International Airport on your right.

The best way to reach the SIXT branch at the airport is by Metro. The Metro Station is located between Arrivals Terminal and rent-a-car building.

The parking is directly located at the SIXT Airport parking zone.

Pick-up out of opening hours is possible for an additional charge. This service is bookable on request. Please provide your flight number, e-mail address and mobile number.


Please park the car in the Sixt car return area at the rent-a-car check-in (level 0) and drop the keys in the key return safety placed in the Sixt check-in box.

Other SIXT branches in the vicinity of Lisbon Airport

What makes Lisbon Airport so special?

No matter what time your flight home is, you can return your car to SIXT at your convenience, even during the night.

Not only are our cars top-of-the-range, but they are affordable too and cater for all budgets.

At our branch you can speak to our team of friendly, English-speaking agents who are on hand to help.

Once you’ve landed in lovely Lisbon, you’ll find the SIXT branch ideally located in the 'Rent-a-Car' area, close to the arrivals hall.

Pick up your Lisbon Airport car hire with SIXT and start exploring Lisbon and the rest of Portugal at your will. Choose from a range of car hire categories, such as a minibus if you are travelling in a large group or a premium convertible for if you want to cruise along the coast with the roof down. Make sure you don’t take a wrong turn by adding a sat nav to your car hire at Lisbon Airport, add a child seat so that your kids are safe, and include an additional driver if you want to share the driving. 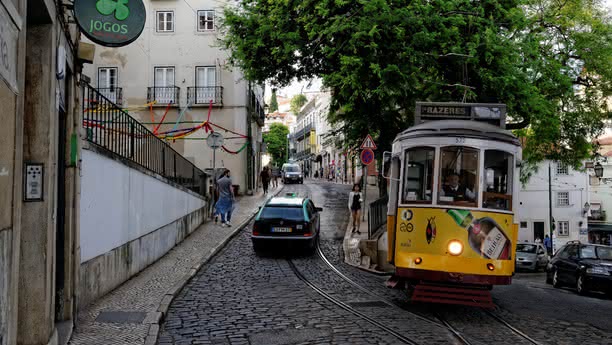 Once you land at Lisbon Airport, you’ll be on your way in no time at all. The SIXT branch is prominently located, for your convenience, close to the arrivals hall. From the arrivals hall you just need to take a right, following the ‘Rent-a-Car’ signs, where you’ll find SIXT to your left. Upon return, you can drop your Lisbon Airport car hire off in the SIXT car return area. This can be found by following the signs to the car return area upon arrival. If this is outside of office hours then you can drop your keys off in the check-in box.

Explore Lisbon with your car hire

Lisbon is a great city to explore with your own car hire from the airport. Take a trip to the historic Alfama district in the city and enjoy the winding, cobbled roads which are scattered with shops and cafes. Then get a great view of this stunning city by taking a trip to the top of the Santa Justa Lift, which provides you with 360-degree views of the Portuguese capital. Then jump in your hire car and take a trip to Sintra, which takes about 30 minutes to reach by car. Once a royal sanctuary, it is now filled with castles and palaces set amongst stunning scenery.

I was very happy with Sixt service. Just for a little bit of context, my 12/05/22 flight had been so delayed that I arrived at Lisbon airport at 2 am (13/5/22). Rental cars were closed already. I had initially a booking with another car rental, GOLDCAR, (all paid for in advance) and even though I kept them in the loop about the delay of the flight, after 5 long hours of wait in the airport for the rental-car to open they wanted to charge me a new booking because they considered me as a "no show", despite the communication we maintained. This new booking came at a price of 419€!! More than the double I had paid initially. I could not afford that. A 2:30 hour flight turned into a 14 hours nightmare. I went to Sixt and I should commend Fábio Fernandes, the only person who's shown some empathy for my situation. I managed to get a similar car to what I had previously booked for 179€! Everything about Sixt was smooth, including dropping off the car. Sixt will most likely became my car rental company to go for. Keep up the good work and thank you.

Obrigado ...... to Mrs Sonia and all the team.Perfect job despite the network failure

We have spoken with Andreis in lisboa Airport, vert nice. Good service

Delightful with my experience in Sixt Airport Shuttle branch, Paula is amazing - both very professional and friendly.

Excellent car! Thanks to the SIXT Lisbon team!