To get to Kaunas Airport you can use public transport (scheduled buses, scheduled taxi). The airport can be reached by cabs of any of the taxi companies servicing the city.

Sixt parking is located at Kaunas airport rental cars parking. To enter or exit parking garage with rental vehicle please stop next to roadblocks. Camera will scan plate number and roadblocks will be opened. To leave rental vehicle in any other parking is strictly forbidden! (fine 20 EUR). Keys and documents please return to Sixt office (rental cars terminal).

Pick-up out of opening hours is possible for an additional charge. This service is bookable on request. Please provide your flight number, e-mail address and mobile number.

Other SIXT branches in the vicinity of Kaunas Airport

Sixt offers car hire at Kaunas international Airport in Lithuania for anyone wanting to easily explore Kaunas and the rest of this country. Here you'll find your choice of car to hire, from station wagons and vans to SUVs, convertibles to coupés or just an economy city car. A Meet and Greet service operates at Kaunas for car hire - simply provide your flight details when you book online and a friendly member of staff with a Sixt sign will meet you in the arrivals hall. 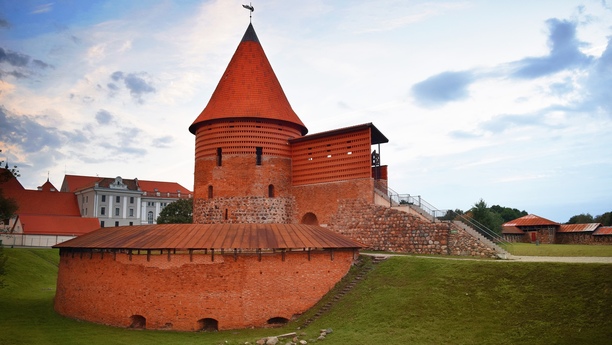 All About The Airport

Kaunas International Airport (KUN) is the fastest growing airport in the Baltic states and the second busiest airport in Lithuania. Served largely by popular discount airline Ryanair, the airport deals with large international passenger jets. It is based in Karm%u0117lava, more than 8 miles to the North East of the centre of Kaunas, so a car rental is the ideal option to travel from the airport into the city centre with ease. With a member of the car rental team waiting to greet you on arrival it couldn't be easier to pick up your cheap car and explore this vibrant Lithuanian city.

There are many exciting things to see and do in this exciting city when you utilise a car hire service at the airport. The Lithuanian Zoo is a great day out for all the family which can be reached with ease using car hire, as is the Zoological Museum. Fans of both history and classical architecture won't be disappointed by the famous city castle, the cathedral, the fort and the breathtakingly beautiful Paaislis Monastery. There are plenty of museums to keep visitors interested, Vytautas the Great Museum and the fascinating Museum of Deportation and Resistance. Absolutely top service and top of the range car with the cost of dinner for four. Sixt is on my favourite and only list for car rentals in Kaunas from now on!!! 💥💥💥💥💥

Update: 1 week after returning the car, sixt got in touch with me to settle the damage fee issue.

The fee was completely waived when it was pointed out that 1091 its too much for a small scratch on alloy.

Sixt waived all damage charges due to this.

Must say this is a very fair approach, unlike many other companies who you need to fight with to get the damage fee to a reasonable amount without ripoff.

Overall I am satisfied with Sixt and how they handled this problem.

Be very careful. I collected car at 11pm in darkness and rain. I was unable to inspect for damages on collection.

When I returned the car, it was claimed there was a scratch on one of the alloys, which was caused by me.

A scratch on an alloy is no big deal and fairly cheap to fix if required.

SIXT sent me an invoice for 1091 euro to fix the scratch on the alloy, what a joke ahahaaha

You can buy a whole new set of alloys for this money.

Lucky inhale excess insurance who will most likely cover this, however be aware that you will be paying your full excess for pretty much a tiny little scratch on a wheel or the car.

Or take out full insurance with them and pay double your rent price which was quoted initially.

Good luck sixt, you just lost a platinum card customer due to this carry on.