SIXT uses cookies to give you the best possible service when using our website. They also help us to improve and evaluate website content, in addition to SIXT product advertisement, so that we can deliver a better experience to our users. By clicking “agree and continue” you consent to the use of these cookies. You can withdraw your consent to individual cookies at any time. For more information on cookies and customization options, see our cookie policy.
Agree and continue
Sixt Car Hire
Car Rental
Kiel

All cities in Germany

Car Rental with Sixt in Kiel

Renting a car in this maritime city in Germany could not be simpler, there are three Sixt car rental outlets in the city. One at the city's Central Railway Station has a 24 hour pick up and drop facility and has cars and estate vehicles available to hire. At both the other car hire outlets, at Kesselschmied Werftstrasse 218, and the Ostseekai cruise passenger terminal, small, family and sports cars as well as 4 x4 vehicles are available. All three outlet offer great car hire deals for example, unlimited mileage, drivers under 25 LDW insurance additional drivers and much more. 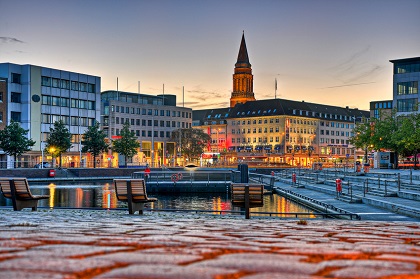 There many attractions in the city, which has a long maritime tradition as a Baltic Sea port and stands on the world's busiest canal. The canal connects the North and Baltic Sea. Exploring the city and this region of Germany is easy with a rental car The city has a dynamic cultural life with its three theatres and World class museums, including the Maritime and Computer Museums, Kunsthalle Art Gallery, and an Opera house. Restaurants abound and fish lovers should sample the Kieler Sprotte (sprats), also the affectionate name for the city's inhabitants. The Kiel-Molfsee Open Air Museum with 70+ historic buildings helps in understanding Germany's history. Take a road trip in your rental car to the historic town of Lubeck, Germany's UNESCO World Heritage site, 88.2 kilometres away. The pretty seaside resort of Travelmunde, has modern and historic attractions, including an early 15th century Fisherman's cottage, is a little further. There is so much to see and do in this part of Germany and hiring a car ensures that visitors can discover as much as possible during their stay.