Nestled at the junction of the Rhone and Saone rivers, with your car hire in Lyon you are free to explore the stunning Rhone-Alpes region at your leisure. Renowned as one of the great gastronomic capitals of the world, you could spend days in Lyon simply trying out the dozens of world class restaurants dotted across the city. Dont forget to drive out into the stunning surrounding areas however, where traditional towns sit amidst breath-taking natural mountains and lakes. With a presence at the airport, both major train stations and in the key districts, collecting your car rental in Lyon has never been easier than with Sixt.

The branch menu above lists the different locations we operate in the city and offers specific details, such as addresses and opening hours. Click on the right-hand grey tab to open a map overview of the city with our branches clearly marked out. Our airport location at Lyon-Saint-Exupery offers extended hours throughout the week for best convenience with your travel plans. We also operate a 24 hour return facility both here and at our train station branches to ensure that you are free to make your onward travel whenever suits you best. 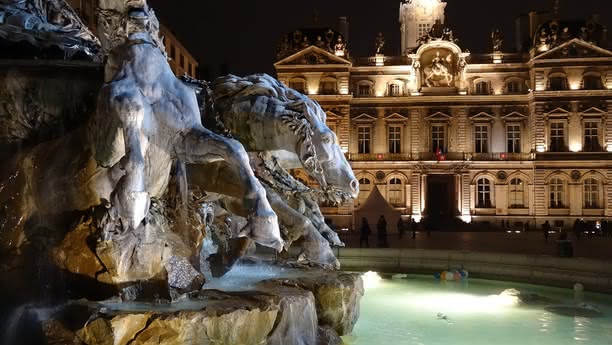 Sixt car hire in Lyon has a huge fleet of vehicles from world renowned brands, such as Mercedes-Benz, BMW, Audi, and Jaguar, and all available at affordable prices. Our car categories include saloons of various sizes to suit both business and leisure travel, as well as estate cars with enough room for the whole family. Our rugged 4x4s are perfect for adventuring in all seasons, making light work of even the toughest road conditions. If you are visiting in the Summer months, why not pick a convertible for a truly unforgettable trip or a sports car for some high-speed thrills. Finally, for anyone looking to transport large items or move home, then we offer a selection of vans and even moving equipment and tow bars too.

Central Lyon is circled by concentric ring roads connected by arterial links to one another and the vast motorway networks beyond. Lyon is an integral merging point for many of the major north-south routes through France, and this can mean that traffic is heavy at these exit points, especially in Summer. Due to the number of rivers and canals in Lyon there can sometimes be hold-ups around the bridge crossings and tunnel between the A6 and A7.

On-street parking in the city centre is allowed at an hourly rate, although it is completely free on Sundays and the entire month of August. For anyone who would rather not hunt for overnight parking close to their accommodation, there are a number of park-and-ride spaces in the more out-lying areas.

As the third largest city in France and with the Historic Site of Lyon designated a UNESCO World Heritage Site, Lyon is an impressive town that has a lot to offer everyone. For arts and culture, the Musée des beaux-arts de Lyon (Fine Arts Museum) in the 17th century Palais Saint Pierre is a must-see as the main museum of the city and one of the largest art galleries in France, housing many iconic paintings from greats such as Rubens, Rembrandt, Monet, Van Gogh and Picasso. Located on the central island between the Saone and Rhone rivers this area is a hive of activity, where most of the citys museums, galleries and businesses are located. The area can become busy due to the limited through-ways, but head into the west area of the city and the roads become less densely packed. The Gallo-Roman Museum documents the interesting ancient history of Lyon, as does a trip to the Romanesque Basilica of St-Martin-d'Ainay and the old silk quarter of Croix-Rouge.

No trip to Lyon is complete without a thorough sampling of local cuisine. Widely heralded as the culinary capital of the world, this unpretentious town is host to 14 Michelin starred restaurants, and some of the best indoor and outdoor markets in the world. Frances rich gastronomic heritage is allowed to shine as fresh, regional products are sourced daily from the neighbouring countryside towns and traditional recipes are lovingly adapted and reworked for a modern audience. Head to a bouchon, a unique type of Lyonnaise restaurant, that specialises in warm, hearty homemade fare.

Perouges is a beautiful old medieval town outside of Lyon and one of the "Plus Belles Villages" of France. Admire the beautiful cobbled streets and small ivy-lined lanes, soaking up the feel of traditional life in rural France.

Take a drive out to Vienne, a stunning ancient city renowned for its Gallo-Roman ruins as well as Gothic churches. Visit the Temple dAuguste et de Livie, a fantastically preserved specimen built in 25 BC which provides a great insight into the changing political landscape of the area.