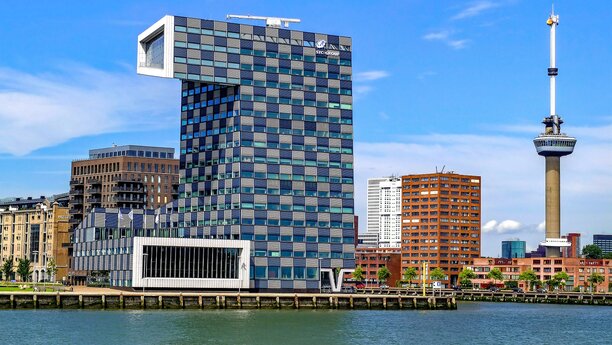 Please enter the parking facility of APCOA Scheepvaartkwartier (Van Vollenhovenstraat 5G, Rotterdam). The barrier will open automatically by recognizing your license plate. Once you're there, please park the vehicle at the SIXT parking spots on level -1. Place the vehicle key in the glove compartment and make sure not to forget any personal belongings in the vehicle. With the help of the SIXT app you end the rental and lock the vehicle.

How to pick up your car

Other SIXT branches in the vicinity of Scheepvaartkwartier/APP only

Pick up your car directly in the Rotterdam maritime district

Book your hire car in the Rotterdam maritime district online or on the SIXT app - start your rental in the Rotterdam maritime district digitally! With the SIXT app, you can choose from vehicles available in your chosen category. Get right into your hire car by opening it easily via the app. Within seconds, you'll be behind the wheel of a modern SIXT hire car on your way to Rotterdam and the surrounding area. Please note that this is not a classic SIXT branch and therefore no staff are present. But using the SIXT app is intuitive and extremely simple: enjoy no waiting time and instant access.

Here's how to pick up your car in Rotterdam's maritime district

You'll need the SIXT app, which you can install on your smartphone for free. Once you have registered, you will have access to SIXT services. 30 minutes before you pick up your hire car, you will be able to select the available vehicle of your choice in the SIXT app. You can pick up your reserved hire car at the APCOA car park in the Rotterdam maritime district. The SIXT parking spaces are located on level -1, and you can find the selected hire car in the SIXT app. The details including the licence plate will be in the app. Once you are near the car, open it via the app; just start the car and drive off. When returning the SIXT car, please park it in a marked parking space in the APCOA car park and take all your belongings out of the vehicle. Return the key to the glove compartment. Then terminate the booking directly through the SIXT app - the vehicle will then lock.

Getting around Rotterdam with a hire car

Rotterdam is a large, modern city, the second-largest city in the Netherlands after the capital, Amsterdam, with a population of over 650,000. The largest seaport in Europe is an important economic factor in the region. Since the 1980s, many skyscrapers have sprung up in the city centre and have shaped its skyline ever since. If you are travelling in a hire car from the Rotterdam seafront, you should stop at the Erasmus Bridge nearby. Completed in 1996, this cable-stayed bridge has become one of Rotterdam's landmarks. Other possible destinations are:

Skip the queue with the SIXT app - Contactless and fast

1. Select exact car in the app

Choose the exact vehicle you'll drive 30 minutes before pick-up. Push messages from the app must be activated.

2. Go directly to the car

No waiting at the counter. The SIXT app will guide you to the location.

3. Open the car via the app

Unlock the car with just one click in the app. The rental agreement is created at the same time.

Get in and drive off. The vehicle key is in the glove compartment.